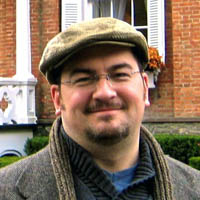 Philip Kain serves as the Director of Academic Engagement and Experiential Learningfor GLS. His essays and reviews have appeared in Newsday, The Forward, The Tony Awards, The Atlanta Journal Constitution, The Houston Chronicle, The Milwaukee Journal Sentinel and other national publications. Kain’s solo and ensemble performance work has been seen at Lincoln Center, The Kennedy Center, City Center, The Joyce, PS 122, Dixon Place and Dance Theater Workshop. For three seasons he appeared as the technology correspondent on the television news magazine Café Digital which aired internationally on The Discovery Channel. His design work has been featured in many magazines and web sites including PC Computing, Yahoo Magazine and Ziff-Davis’ Internet Life. He is the creator and writer of the award-winning short “Kung Pow Wow” and the multi-platform series “The In-Betweens of Holly Malone.” He has published half a dozen books for tweens with Simon & Schuster including the award-winning series “The Social Experiments of Dorie Dilts” and the best-selling series “Commercial Breaks” which has recently been translated for French audiences.