Prof. Gurland with letters from past students 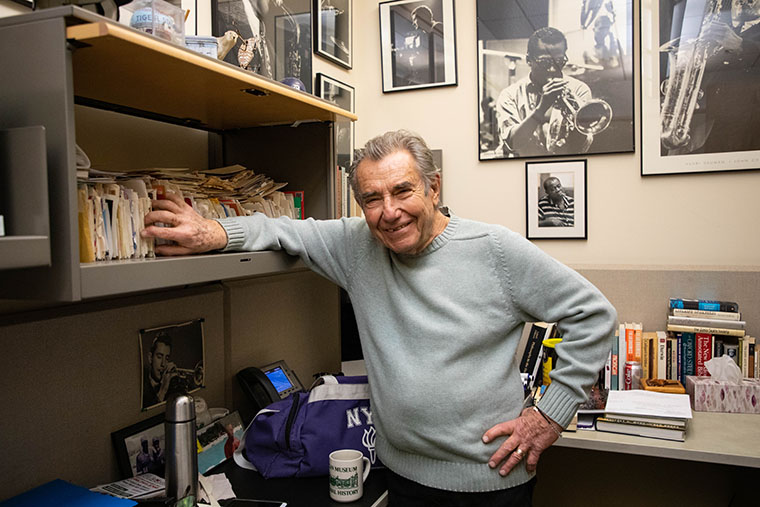 As Professor Bob Gurland buckles down to finish his very last round of grading before his retirement at the close of the semester, we'd like to take a moment to recognize his many years of dedication to educating young minds. A bit of your time hardly seems too much to ask after this beloved faculty member, who says "there is no greater gift to give another than one's time," has so graciously given us so much of his.

What was your first impression of NYU?

I attended NYU in the 1960's as a graduate student while simultaneously teaching mathematics at C.W. Post College of LIU. Hence I never really became integrated into the campus life of the university.

I grew up in the Bronx, a city boy, hence I was not awed by the size of the school. I was more familiar with the Bronx campus on University Avenue (NYU Uptown) than I was with NYU on the Square (NYU Downtown).

There is no shortage of Greenwich Village restaurants and watering holes, both East and West of the campus center to satisfy any taste or demand. Many of the places I frequented when I arrived at NYU are no longer in existence. The missed Second Avenue Deli has been replaced by Mighty Quinn on Second Avenue who deliver first rate brisket. The pierogies and stuffed cabbage at Veselka, a Second Avenue Ukrainian restaurant, provided me with comfort food when I was in need. In the losses category, I think back to two campus coffee and breakfast food establishments. The first, Chock Full Of Nuts, across from the Main Building, supplied the burgers, franks and coffee I consumed between night classes. The second, Zum Zum, on 8th Street, offered primo pancakes and waffles, my frequently craved breakfast fare.

Prof. Gurland shares a photo from his days of coaching NYU baseball

Is there anything people would be surprised to learn about you?

Most people tend to categorize academics as "book worms". I tried as a child to worm my way through the Public Library with considerable success. However, recognizing that the prime American contribution to world culture is baseball and jazz, I passionately filled my life in pursuit of both. My personal skills as a shortstop, honed on the rocky sandlots of the Bronx, remained with me throughout my life both as an avid fan and eventually, as a coach of the NYU baseball team, a position I enjoyed for several years. Contrary to the assumption that a "Bronx boy" would be a devoted Yankee fan, I became a rabid fan of the Detroit Tigers and of my role model, Hank Greenberg, affectionately known as the Hebrew Hammer. And to address my love of Jazz, I was viscerally connected to my trumpet which I practiced with fervor and which resulted in my being able to play professionally in swing and Latin bands.

How long have you been at NYU and at Liberal Studies?

My teaching career spans better than 60 years. I have taught every grade from the fifth starting in 1957 through graduate school. As an evolving teacher, I practically replicated my own long educational experience. I was tenured as a professor of mathematics at C.W. Post, but ultimately I abandoned mathematics for philosophy. I taught my first course at NYU in 1967, as a visiting adjunct and eventually was tenured in the Philosophy Department and served it in a host of ways including Department Chairperson and Director of Undergraduate Studies. Upon my retirement from the department in 2007 I moved to the Liberal Studies Program and the Stern School of Business until my final retirement at the close of the current semester.

What have you taught over the years and what has been the most fun or rewarding to teach?

I have taught a very wide range of courses. When in mathematics my areas of concentration were Mathematical Logic, Probability and Statistics and the History of Mathematics. I was initially hired by the Philosophy Department to teach logic on many levels but my varied interests took me far afield. Over time, I taught every period in the history of the philosophical discipline, from Ancient to Modern. The eclectic array of courses I've designed and taught over the years include American Philosophy, Practical Reasoning, War and Morality, The Philosophy of Law, The Philosophy of Education, The Philosophy of Humor, The Philosophy of Sports, and Philosophy and Literature.

What changes have you observed throughout your time in New York City and at NYU?

This question is too large to deal with in a few lines. The city has devolved into a place that makes stark the gross inequality of income, a problem that continues to influence the student body. Manhattan has become a playground for a privileged elite. Rents have skyrocketed and small businesses that resided at the heart of neighborhoods have been squeezed out by amazonian mega-stores altering, to its detriment, the profile of the city. On a positive note, NYU has seen its student body transformed from a tri-state commuter school to one demographically diverse. Another most radical change is in how students learn and it is reflected in student life. The new technologies have penetrated and altered all aspects of the culture including educational processes. Retention, writing skills, and reading habits have all been impacted, negatively in my view. But don't get me started...

What you'll miss the most about teaching:

Initially, I suspect that I will miss my daily passion of creating a dynamic learning environment. The ultimate challenge we as educators face is the preparation of persons to live in a future world whose contours and dynamics are unpredictable. I've taken up this challenge for many decades, and I will surely miss its absence in my life.

Additionally, I will miss the interactions with students that have enriched my life and have contributed to my perspectives as well. My connection to the NYU student body has been forged by my inclusion in student life beyond the classroom. In addition, I look back fondly on my sixteen years as the Faculty in Residence in the Third North dormitory. No more of the fun bagel brunches that I hosted during exam days! My belief is that teaching is often a theatrical process and I have always loved doing my "stand-up" role over the years. One student paid me a cherished compliment in a course evaluation: "Getting taught by Gurland is like getting taught by George Carlin." Alas, through retirement, I will lose my audience and the opportunity to air my ideas and arguments. In addition, I will miss preparation for class. Crafting my lectures involves expansion and examination of my own ideas, thus promoting my personal intellectual growth.

My life, in the main, has been played out in the classroom. To leave its environs involves an irreplaceable loss. But I will always be grateful to NYU for providing me with the opportunity to participate in "passing the torch" and for offering me a platform to insinuate myself into the personal and intellectual lives of so many young persons.

Prof. Gurland laughs at the persistent interest in his famed gym bag 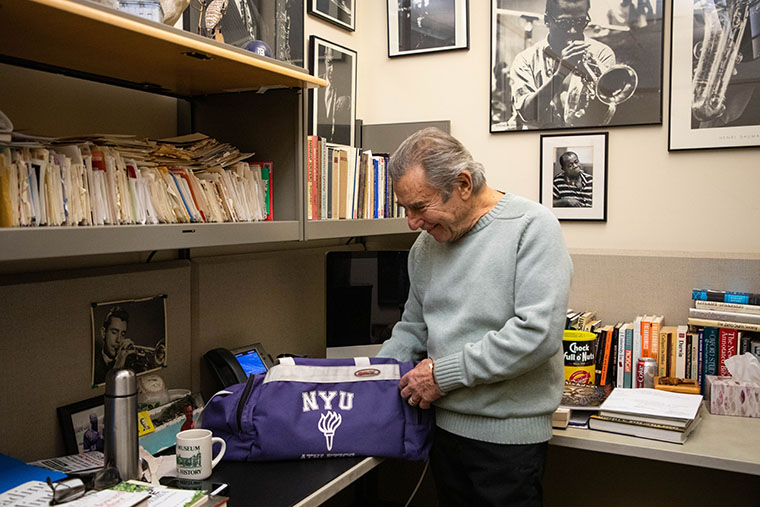 Can you tell us the story about that gym bag?

My omnipresent gym bag that has peaked so much unforeseen interest is merely a relic of my coaching days as an assistant coach for the NYU baseball team. It is a perfect size to transport my lecture notes, books, lunch, etc., and It has become associated with me as it has maintained its serviceability. As its stitching becomes unraveled, its loss will also be mourned. I suspect its remains will have to be surgically removed from my shoulder. Its passing will be a grim reminder of halcyon days spent on the baseball diamonds of Brooklyn and Florida. But alas, the remnants of this classic totem of NYU baseball will not reside in a glass case in Cooperstown.

The best advice someone's ever given you:

A bit of advice that appears to have a comic quality... "Never let ignorance stand in your way."
The underlying message: One ought to recognize one's limitations; of many things we are ignorant, but one must forge ahead with both courage and humility.

My advice to others, a "Professor G" original - Time is the currency of love.
There is no greater gift to give another than one's time. Our time on this planet is finite, its amount unpredictable. Therein lies its value.

And finally, it does us well to remember that we pass through this chapter of our lives but once. There are no rewrites. If you can do something to help another do it! "Do the right thing" because it is right without expectation of reward.