What gendered lives are valued and which are made expendable? How can we better understand and appreciate our local and global interdependencies? Join feminist scholars and activists for a series of panels reflecting on our current historical moment. Drawing from contexts across the globe, we consider how life has been valued and devalued, the contours of our global interdependence, and how we can imagine and build just and sustainable futures. 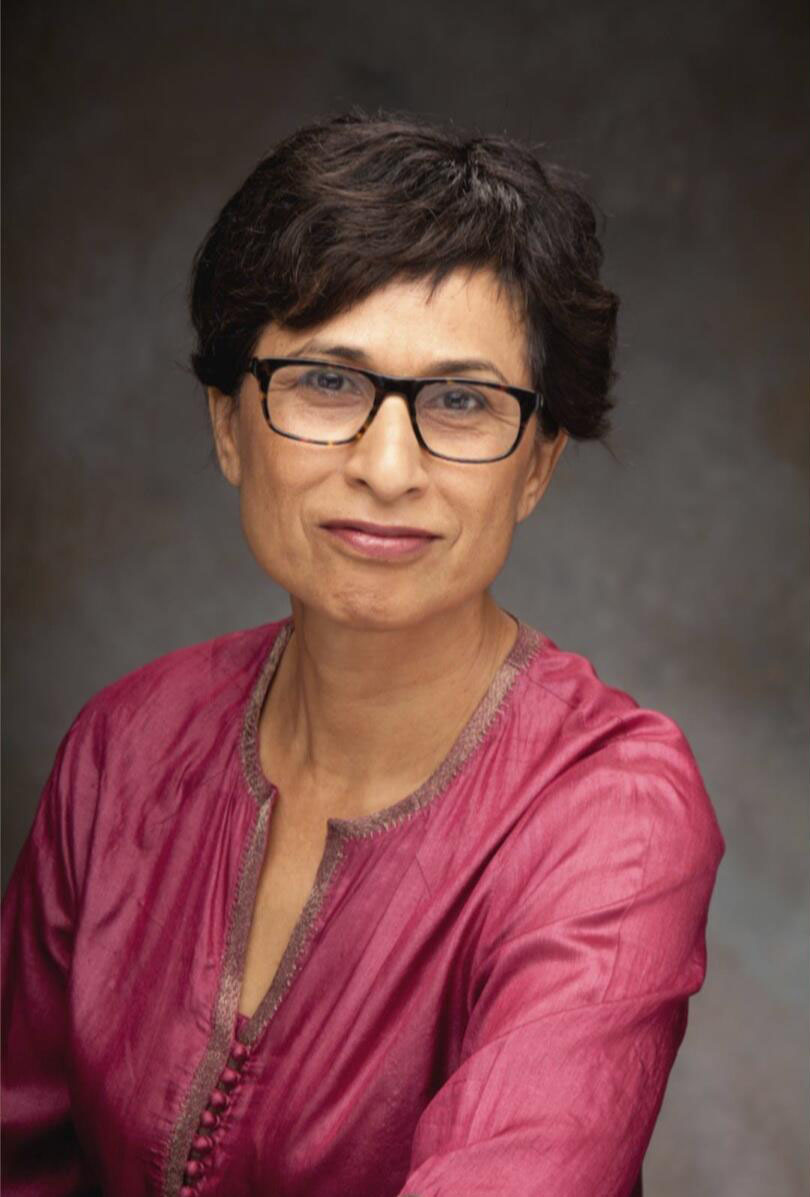 10:00am -10:45am - Opening & Keynote Speaker with Dean Julie Mostov, Lisa Coleman, and Inderpal Grewal.
“Towards a Deep Pluralism: Feminist Futures in Patriarchal Nationalisms”

10:45am -12:15pm - Panel on Expendability with Jacqueline Bishop, Dina Siddiqi, You-Me Park, and Mitra Rastegar. Moderated by Julie Mostov
What gendered lives are valued and which are made expendable? How is the protection of some mobilized to make other lives expendable?

12:30pm -1:15pm - Lunch Conversations
All attendees are invited to join a Breakout Room for a facilitated discussion.

1:15pm -2:45pm - Panel on Interdependence/Solidarity with Crystal Parikh, Meryleen Mena, Jallicia Jolly, and Shivangi Shrivastava. Moderated by Minu Tharoor
How can we better understand and appreciate our local and global interdependencies? What is feminist solidarity in the context of such economic, political, and military interdependence and inequality?

3:00pm -4:30pm - Panel on Transformation with Rada Ivekovic, Cecilia Palmeiro, Zahra Ali, and Ather Zia. Moderated by Gayatri Gopinath.
What are the possibilities for transformation growing out of this historic year and drawing from transnational feminist praxis?

Zahra Ali is a sociologist and Assistant Professor of Sociology at Rutgers University-Newark, her research explores dynamics of women and gender, social and political movements in relation to Islam(s) and the Middle East and contexts of war and conflicts with a focus on contemporary Iraq. She is the author of Women and Gender in Iraq: between Nation-building and Fragmentation (Cambridge University Press, 2018), is a sociology of Iraqi women’s social, political activism and feminisms. Zahra also co-edited the journal volume Pluriversalisme Décolonial with Prof Sonia Dayan-Herzbrun (Kimé, 2017) that explores decolonial theories reflecting on non-eurocentric epistemologies, aesthetics, political thoughts and activisms. She also edited Féminismes Islamiques (La Fabrique editions, 2012) that reflects on transnational Islamic/Muslim feminisms through a postcolonial and intersectional feminist perspective analyzing the interrelationship between race, gender, religion and postcoloniality.

Jacqueline Bishop is Clinical Associate Professor of Liberal Studies and an award-winning writer and visual artist born and raised in Jamaica, who now lives between London and New York City. She has twice been awarded Fulbright Fellowships, including a year-long grant to Morocco; her work exhibits widely in North America, Europe and North Africa. Bishop's books include a novel, The River’s Song (2007), two collections of poems, Fauna (2006) and Snapshots from Istanbul (2009), a 2007 art book entitled Writers Who Paint, Painters Who Write: 3 Three Jamaican Artists, and The Gymnast and Other Positions (2015), a collection of short stories, essays and interviews. The Gymnast and Other Positions won the nonfiction category of the 2016 OCM Bocas Prize for Caribbean Literature. The Gift of Music and Song: Interviews with Jamaican Women Writers is forthcoming.

Gayatri Gopinath is Professor in the Department of Social and Cultural Analysis, and the Director of the Center for the Study of Gender and Sexuality at New York University. She works at the intersection of transnational feminist and queer studies, postcolonial studies, and diaspora studies, and is the author of two monographs: Impossible Desires: Queer Diasporas and South Asian Public Cultures (Duke UP, 2005), and Unruly Visions: The Aesthetic Practices of Queer Diaspora (Duke UP, 2018). She has published numerous essays on gender, sexuality, and queer diasporic cultural production in anthologies and journals such as Journal of Middle East Women’s Studies, GLQ, and Social Text.

Rada Iveković was Senior Research Fellow at the Asia Research Institute, National University of Singapore in 2013, and visiting professor at the International Institute for Cultural Studies at Chiao Tung University at Hsinchu (Taiwan) in 2019. Former programme director at the Collège international de philosophie, Paris (2004-2010), philosopher, indologist, writer, she was born in Zagreb, Yugoslavia. She taught at the Philosophy Department of Zagreb University until 1991, then at universities in France (Paris-7; Paris-8 Saint-Denis), and was visiting professor at many other universities in different countries. Recent e-book: Politiques de la traduction. Exercices de partage, préface E.Balibar, TERRA-HN, 2019.

Jallicia Jolly is a post-doc and incoming Assistant Professor in American Studies and Black Studies at Amherst College. Dr. Jolly researches and teaches on Black women's health and transnational feminist activism, reproductive justice, and intersectionality and HIV/AIDS in the U.S. and Caribbean. Her scholarship and community-engaged work foregrounds the interrelationship between lived experience, pedagogy, and political engagement and fosters a black diasporic feminist agenda in the Americas. Dr. Jolly's work has been supported by grants and fellowships such as The Fulbright Scholar Program, The Mellon Mays Foundation, and the National Women's Studies Association. She connects academic work to community interventions that advance equity, reproductive justice, & community-building.

Meryleen Mena is a Dominican American New Yorker from pre-gentrified Washington Heights and Harlem, a socio-cultural anthropologist, abolitionist, and an educator. She holds a Doctoral degree in Cultural Anthropology, and a Graduate Certificate in Women and Gender Studies. For her Doctoral research, she studied the experience of women and gender non-conforming individuals in the criminal justice system in São Paulo, Brazil. She is a Mellon/ACLS Public Fellow, and occasionally teaches for the CUNY system in New York City.

Julie Mostov is Dean and Professor of Liberal Studies. Her scholarship broadly focuses on the politics of national identity, sovereignty, citizenship, and gender and promotes the notions of soft-borders and transnational citizenship. All of her work is tightly linked with commitments to and experiences of transnational feminisms, including publications such as her Soft Borders: Rethinking Sovereignty and Democracy; the co-edited volume (with Rada Ivekovic) From Gender to Nation; her 1995 “’Our Women’/’Their Women’: Symbolic Boundaries, Territorial Markers, and Violence in the Balkans,” and her 2021, “Populism is Always Gendered and Dangerous.” Dean Mostov joined NYU as the first woman Dean of Liberal Studies, from Drexel University, where she was Senior Vice Provost for Global Initiatives and Professor of Politics, as well as a past Director and one of the founders of Drexel Women’s Studies.

Crystal Parikh is Professor of Social & Cultural Analysis and English at New York University. Most recently, she has published Writing Human Rights: The Political Imaginaries of Writers of Color (2017), which was the recipient of the Association for Asian American Studies Award for Outstanding Achievement in Humanities and Cultural Studies: Literature. She is also the editor of The Cambridge Companion to Human Rights and Literature (2019) and the Director of the Asian/Pacific/American Institute at NYU. She is currently working on a collection of essays, provisionally titled The American Literatures of Transnational Feminism, from which this talk is drawn.

You-Me Park is Director of Women's and Gender Studies at Georgetown University. She co-edited with Rajeswari Sunder Rajan Postcolonial Jane Austen (2000) and a special issue of Interventions: International Journal of Postcolonial Studieson US neoimperialism (2004). Her articles have appeared in Feminist Studies, American Literature, Positions: East Asia Cultures Critique, Comparative Studies of South Asia, Africa, and the Middle East, and Pre/Text, as well as in numerous anthologies and edited volumes. She is presently completing a monograph, War on Women: Militarism, Gender, and Human Rights, which rethinks the connections among militaristic ideology, human rights discourse, and contemporary theories of biopolitics and sexual violence.

Cecilia Palmeiro received her PhD from Princeton University -Department of Spanish and Portuguese (2009). She teaches contemporary Latin American Cultural Studies and Global Liberal Studies at NYUBA, and Gender Theory at National University of Tres de Febrero (UNTREF). She has published the research books Desbunde y felicidad. De la cartonera a Perlongher (2011), Néstor Perlongher. Correspondencia (2016) and the novel Cat Power. La toma de la Tierra (2017). Together with Fernanda Laguna, she is the curator of the living archive, exhibition and book High on the Tide: Diary of a Feminist Revolution. Since 2015 she is a member of the Ni Una Menos collective.

Mitra Rastegar is a Clinical Associate Professor in Liberal Studies at New York University. She earned her doctorate in Sociology from the Graduate Center of the City University of New York. Her forthcoming book Tolerance and Risk: How US Liberalism Racializes Muslims (University of Minnesota Press, 2021) examines the role of articulations of tolerance and sympathy toward Muslims, including within center-left media, feminist and LGBTQ discourses, in racializing Muslims as a population of risk. Her scholarship has been published in GLQ: Journal of Lesbian and Gay Studies, WSQ: Women’s Studies Quarterly, and International Feminist Journal of Politics.

Shivangi Shrivastava is an Inter-Agency Coordination Specialist at UN Women. Most recently she served as the Program Manager for a Bill & Melinda Gates Foundation funded UN Women program on building advocacy capacity for gender equality and the Sustainable Development Goals in Tanzania. Shivangi has over 14 years of experience with the UN on policy development, program management, strategic advocacy and partnerships focused on gender equality, child and youth rights. She holds a MA in International Relations & Economics from the Johns Hopkins University's School of Advanced International Studies and is a University Gold Medalist from the University of Mumbai, where she earned a MA in Politics.

Dina M. Siddiqi is Clinical Associate Professor in Liberal Studies at New York University. Trained as a cultural anthropologist, her research joins development studies, transnational feminist studies, and the anthropology of Islam and human rights, with a regional focus on Bangladesh/South Asia.  She has published widely on supply chain capitalism and the global garment industry, and on gender justice, non-state dispute resolution, and the cultural politics of Islam and nationalism. She is on the advisory board of Dialectical Anthropology, and serves on the editorial board of Routledge’s Women in Asia Publication Series.

Ather Zia, Ph.D., is a political anthropologist, poet, short fiction writer, and columnist. She is an Associate Professor in the Department of Anthropology and Gender Studies program at the University of Northern Colorado Greeley. Ather is the author of Resisting Disappearances: Military Occupation and Women’s Activism in Kashmir (June 2019) which won the 2020 Gloria Anzaldua Honorable Mention award. She is the co-editor of Can You Hear Kashmiri Women Speak (Women Unlimited 2020),  Resisting Occupation in Kashmir (Upenn 2018) and A Desolation called Peace (Harper Collins, May 2019). She has published a poetry collection “The Frame” (1999) and another collection is forthcoming. In 2013 Ather’s ethnographic poetry on Kashmir has won an award from the Society for Humanistic Anthropology. She is the founder-editor of Kashmir Lit and is the co-founder of Critical Kashmir Studies Collective, an interdisciplinary network of scholars working on the Kashmir region.