From Poetry to Bread: Alum Graison Gill’s Journey to a James Beard Award 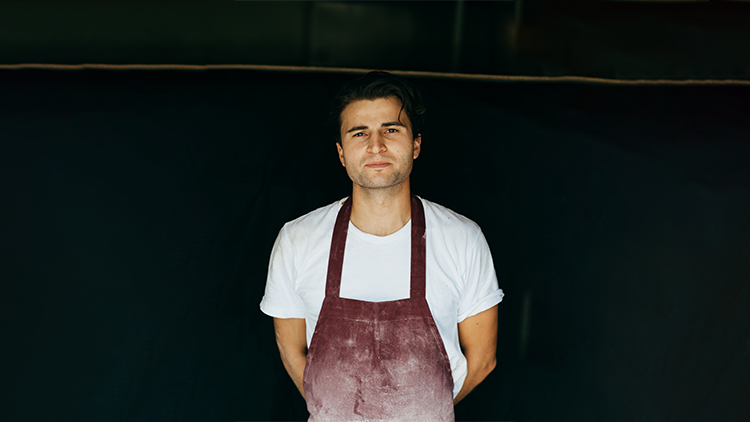 Liberal Studies alum Graison Gill spends his days thinking about how to make bread—that humble piece of toast you might find on your breakfast plate—better. While at NYU, Gill took classes that helped him see how writers and thinkers of the past can shape modern day approaches to problem solving. Now, the wisdom of philosophers of bygone eras permeates the air at Gill’s Bellegarde Bakery in New Orleans, Louisiana, where he wants people to be able to experience bread, a product often seen as unhealthy and overprocessed, as a healthy and refined part of their diet.

“I think of it as art,” Liberal Studies professor Karen Karbiener said about Gill’s work during a virtual discussion with the baker. “There is a true art to what you’re doing here.”

The recent James Beard Award recipient specializes in using traditional methods of baking to craft ingredient-driven flours, pasta, and, of course, bread. Bellegarde Bakery is one of only a handful of bakeries in the country that mills its own flour and uses a custom stone mill to produce the highest quality flour for its products. The result is a loaf of bread you couldn’t find at your typical supermarket.

“The inside [of the bread] is so warm and so moist, which a lot of people don’t execute well, and Graison does it consistently,” Top Chef Season 11 runner-up Nina Compton said.

Professor Karbiener recently invited Gill to discuss “Nineteenth Century Health Reform and the Bread Revolution” for the Walt Whitman Initiative's Robust American Love series. In the talk, Karbiener and Gill, along with Stephen Jones, Director of the Bread Lab at Washington State University, considered Whitman's philosophy on healthy living, and how those ideas can be seen in famous works like Leaves of Grass.

"Professor Karbiener taught me to distill the passion in my heart into something that the world can experience and enjoy,” Gill said. “Bread became a perfect vehicle for this.”

One of Gill’s core values is retro-innovation, or using the methods of the past despite the advances of technology. Using electricity only for refrigeration and baking is key to his process of creating a loaf of bread that Whitman himself would recognize.

“Hopefully, someone would be able to recognize our bread if they were buying it from New York in the 1840s,” Gill said.

The connection between Whitman and Gill’s current outlook on bread production is apparent. In his essays on healthy living, Whitman worried that people of his time were eating foods that were not substantial and made them sick. To Gill, the emergence of incredibly processed white bread that has no nutritional value has had a similar effect. Each day at Bellegarde, he’s turning this progression on its head with intentional bread-making that creates a more nutritious finished product that preserves the quality of the flour from which it's derived.

“Nutritionists have been telling us that diversity on your plate, on your palate, in your diet, is critical to your health,” Gill said. “In my opinion, that starts with your bread.”

In his professional work as a baker and beyond, Gill credits Professor Karbiener’s mentorship in helping him see challenges in his career, and life, differently.

“The attitude [Professor Karbiener] imbued in us students–one in which the compassion for beauty has no boundaries–has allowed me, in both my personal and professional life, to see and appreciate relationships and commonality, not adversaries and boundaries,” Gill said.

Gill and Professor Karbiener are now working together on a panel for the annual conference of the Association of the Study of Food and Society where Gill will take center stage.