Prof. Kaia Shivers Connects a Hungry Public With Black Farmers While Asking Us All to Reimagine Our Societal Constitution Anew 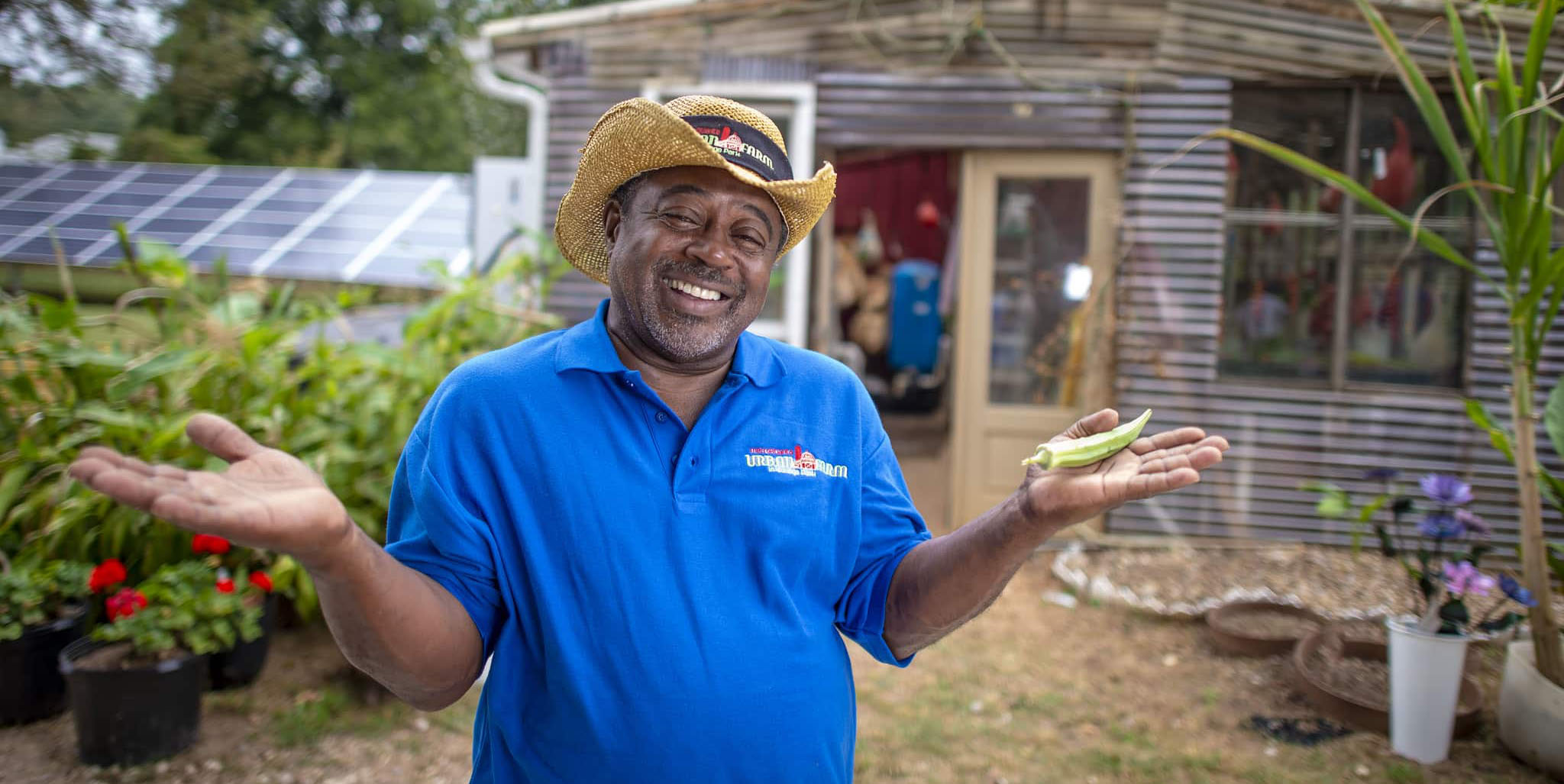 Well loved as she is inside the classroom, especially with her current appointment among LS first years at NYU Florence, LS professor Kaia Shivers is making equal strides beyond her four Zoom walls. Dipping her digital quill in ink and her bare hands deep into the soil of the earth, Shivers launched Ark Republic, a “member-funded, ad-and-cookie free, media outlet providing original multimedia coverage, columns, art pieces and feature stories” and more recently, the Black Farmers Index (BFI), the most comprehensive free directory of Black farmers across the United States. Connecting a hungry public directly to traditional and non-traditional Black farmers, the BFI works to build stable food networks while addressing a long history of injustice against the very people who have been the bedrock of this country. Setting the stage for the sociopolitical backdrop of her two brain children, Shivers weaves a story of building up the Black farming community in the context of reimagining entirely new ways of relating to each other, our history, and the land.

This interview has been edited for length and clarity.

Liberal Studies (LS): What's the origin story of Ark Republic? Can you speak to its name?

Professor Kaia Shivers (KS): Ark is from the city Newark, New Jersey. I lived there for 12 years and built my hustle in that gritty city. As a Los Angeleno, before moving to Newark it was all flip flops and smoothies. In New Jersey, it became boots and a slice of pizza.

I did my research in Newark and fell in love with its old bones and swagger. While living there, I did a hyper-local blog featuring everyday people. From it, I saw a need to tell more stories about regular folk, but wanted to do it differently.

At the same time, Trump just got into office. Protests, conflicts and clashes became the norm. News morphed into political fodder that fed pundits, but starved the people. In the chaos, news became very predictable. To me, the everyday information we need to navigate the world began thinning out. Plus, those feel-good stories of communities and dope people were dwindling.

With that and a longtime goal to launch a publication, I started Ark Republic. Adding “republic” was this idea of forming a new nation, a new way of being. It was a total play on the Republican party. Like, what if you googled Republican and Ark Republic popped up with me, a Black woman with braids or twists? Congressman Lewis would say that this is good trouble. I say it is a good disruption.

LS: Ark Republic's mission is "to sketch a new social constitution by telling stories that provide a platform for productive engagements." Could you elaborate on what this means?

I had this lofty idea that we could reconstruct our world by reconfiguring our personal and societal constitution via the media, so when I started Ark Republic, I wrote the mission statement as a declaration of independence. One of the lines is, “The people deserve better,” but we have to forge the “better.” Ark Republic just documents it in a way I hope captures these nuanced and vivid bits of our stories.

LS: What is the Black Farmers Index and what motivated its creation?

KS: While reporting on COVID-19 in Italy, there was a riot in Sicily because some working class and poor people ran out of money to buy food. I thought, if that could happen here, it could happen in the US too. Only, it’s worse in the US. However, I wanted to be part of a solution rather than solely report on the problem. The idea to create a database directing consumers to farmers came out of considering what would happen if grocery stores closed or ran out of food.

The index focuses on Black farmers because they are the most maligned in the agricultural industry, but they’re also independent because few of them have funding or backing from the U.S. Department of Agriculture (USDA). On one hand, they would experience issues in the pandemic, but it also provided a window to sell their food without USDA constraints.

If you remember, the USDA forced farmers to dump their milk and leave crops in the field to rot. Some farmers began to sell directly from their farms, but many could not because of the agreements they had with the government. Meanwhile, many Black farmers were passed over by the USDA and could sell their food, making them a great demographic to promote.

With all of my extra time, I began to research farms. I discovered all of these innovative ways people were growing food. Apiaries, mushroom foragers, traditional farmers, microgreen and hemp farms, flower farms. I even added crabbers, fisherfolk, and a few tobacco farms. While putting together the database, discovering the farms became my therapy, similar to pulling a beautiful carrot out of the ground. I felt like this was more about justice than farming, especially as the George Floyd protests were in full steam and one of the ways that Americans were addressing inequity was investing in Black businesses.

Within two months of launching, there were over 150,000 hits on Ark Republic’s site. People were asking about how they could locate farms and farmers were signing up to be on the list. I knew that I couldn’t sustain the index on Ark Republic, and the Black Farmers Index needed its own identity.

As a result, two of my sisters pitched in, and we turned it into a non-profit, located in the South where most Black farmers live. Working out of my grandmother’s home in Lafayette, Louisiana, where she had her own garden, chicken coop, and a fig tree where I’d picked figs and ate as a child, the BFI has grown to just over 700 farms. Our goal is to have at least 10% of the approximate 35,000 farms listed in a year, as well as to help farmers grow, especially by helping them navigate the digital landscape.

We want to ensure that the people are fed, and so are the farmers.

LS: According to the New York Times, in 1920, Black people made up 14 percent of farmers, but only make up 1 percent today. What role does Black farm ownership play in environmental and racial justice?

KS: Black farms play a huge part in both. As we discovered, most of the farms we have on the list either use natural or organic growing methods. They sell local, and they also do not waste anything they grow.

The environment needs such a break, and these small acts of love are resistance to me. While a significant portion of Black farms balance out commercial farming that destroys the soil or the multitude of factories polluting communities, many farmers are also dedicated to teaching communities how to grow again. This is environmental justice too, to teach people how to grow their own food.

I am learning all of these ways that Black farmers work to live in concert with nature. Black farm ownership is connected to a respect of the land, and even a relationship to it that is sacred.

This is quite the opposite for most Black people who often live in some of the most environmentally toxic locations alongside Brown folk. I grew up with chronic asthma and lived next to an oil well in Los Angeles. Now I know why I was sick all the time.

In the US, Black people were the first growers that fueled the country, meaning it was their agricultural work and artisanship that fueled the economy, and Black farmers have always been connected to racial justice. They backed the Civil Rights Movement unbeknownst to many. From providing chickens and other food provisions for workers, to organizing the largely agrarian Black communities. Even the Black Panther Party for Self Defense came from Stokely Carmichael’s (renamed Kwame Ture) work to help farming communities in Alabama defeat a racist Democratic white bloc. Because people were illiterate at the time, both Black and white, pictures were used on voting ballots. During the primaries, the white Democrats used a white cockerel. In response, Carmichael collaborated with the farmers and their candidate and came up with the image of a black panther to symbolize eating the white hen.

So vicious were the local whites that they evicted most of the sharecroppers from their land. Blacks were forced to live in tent cities, and though there were many challenges, they stayed there to vote and fight for enfranchisement. It is no coincidence that shortly thereafter, Stan Lee came out with the Marvel comic of the Black Panther living in an all-Black community called Wakanda.

LS: Often when new farmers seek land, they forget to consider aging farmers on the verge of retirement. Do you see the BFI as a way to connect older generations of Black farmers with the youth and perhaps create opportunities for land transfers within the Black community?

KS: This issue is a part of the database we’d like to add. There have been multiple requests to connect with older farmers, or people with acreage who do not have heirs to pass it on. Because Black farmers and those sitting on farm land are so invisible and farmers are largely disconnected from one another, it’s more of an issue of establishing a network that is reliable.

Another issue is the racial wealth gap. The wealth of a single Black mother is $0 in the US. The Black family has the total liquid wealth of something like $1,700. On one hand, aging farmers are finding it more difficult to keep the land. While on the other hand, Gen Xers, millennials, and Gen Zers have issues buying significant plots of land to grow food because they are weighted down with debt or simply do not have the money that white counterparts get from inheritances or parents selling properties, etc. Simply getting a loan is difficult due to systemic racism, and even food justice organizations and initiatives supporting Black farmers are strapped for resources too.

LS: How do the principles behind Ark Republic and the BFI fold into your classroom?

KS: I would say it’s the other way around. The classroom actually sharpened me and gave me the audacity to create both.

The way students construct the world through writing is fascinating. Every semester pushes me to expand and refine my craft and myself. It was through teaching that I had to become more invested in using digital tools and telling a story. Honestly, if it weren’t for my experiences at NYU, I might have allowed my media vision to remain in my mind.

LS: Any further reading for folks to learn more about the legacy of Black farmers and/or resources for supporting food sovereignty?

KS: I wish I had a reading list. There are few books that tell the full story. I encourage everyone to study Fannie Lou Hamer. She is the mother of food justice and mobilizing the political strength of Black farmers in this country.