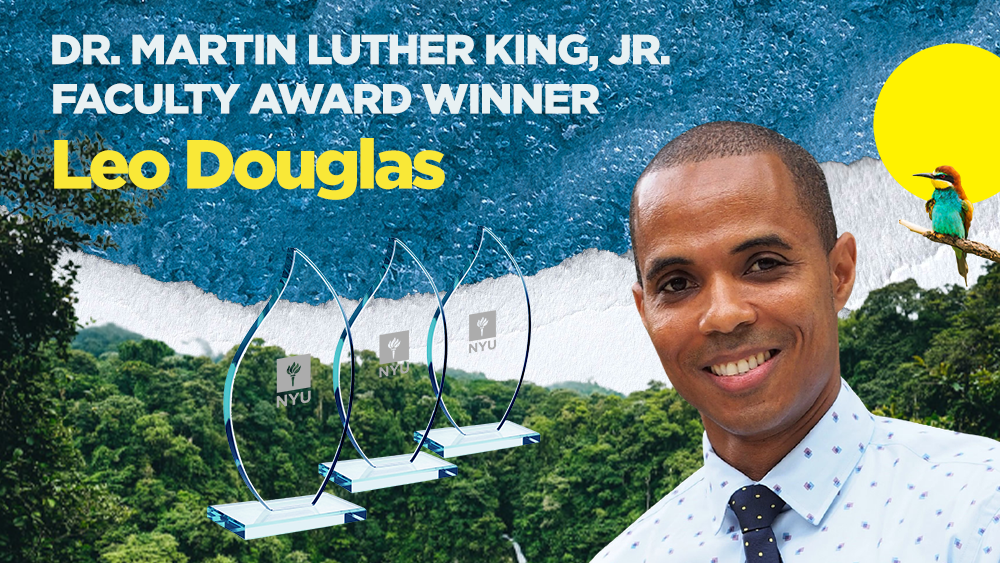 NYU’s Dr. Martin Luther King, Jr. Faculty Award is sponsored by the Offices of the President and Provost, in partnership with the Office of Global Inclusion, Diversity, and Strategic Innovation. This prestigious award recognizes outstanding faculty who exemplify the spirit of Dr. Martin Luther King, Jr. through teaching excellence, leadership, social justice activism, and community building. In addition, these faculty make a positive impact within the classroom and in the greater NYU community. Current NYU students nominate faculty, and recipients are chosen by a committee of past recipients and student leaders.

Professor Douglas is an award-winning conservation biologist whose scholarship and community involvement focus on the inclusion of Indian, Indiginous, and African-descended  scholars, communities, and youth in nature conservation. Hailing from Kingston, Jamaica, Professor Douglas’ keen understanding of the importance of Caribbean economies, sustainability, and culture and his awareness of the ways in which systemic racism and colonialism have undermined Black community participation in conservation efforts have led to a lifelong commitment to social justice/social change in the field.

Braimah reflected that "Professor Leo Douglas was not only engaging and attentive, but he was sure to tie each topic back to pertinent happenings, his Jamaican roots, and global consciousness. His emphasis on countries in the Global South and BIPOC environmental crises, such as Flint, made my learning experience more meaningful."

Ekukole-Sone shared that "[Professor Douglas] is a man whose heart is in his job. His efforts, whether it may be in NYU or the Caribbean, [empower] the youth of today to start taking part in environmental initiatives that will hopefully produce a better tomorrow."

Accepting the award in honor of his now deceased father, Professor Douglas’ remarks at the presentation ceremony invoked a touching understanding of the sacrifices he has made—and continues to make—to pursue his lifelong commitment to service interwoven with his career in academia. The audience was moved by his story of aligning his professional journey with the spirit of one his favorite Dr. Martin Luther King, Jr. quotes: "Everybody can be great...because anybody can serve."

Drawing on lessons from and memories of his minister father, who built three churches and served the community in the most rural and poorest areas of Jamaica, Professor Douglas recounted how he has deliberately crafted his work around service. He recognized the urgent need to help ensure that Black scholars, communities, and youth were well-positioned to meaningfully influence nature conservation. Despite well-intentioned warnings from colleagues to wait to serve after his career in the competitive world of academia and the life sciences was more established, Douglas instead forged ahead immediately after earning his PhD from Columbia University in 2012 and invested over six years working with multiple NGOs. He fundraised, designed and taught programs, worked unpaid, and conducted field work with BIPOC (Black, Indigenous, and People of Color) youth and scholars...all for the sole purpose of identifying, mentoring, training, and providing much needed financial support to what might be the next generation of conservation scientists in countries in Latin America and the Caribbean.

The above-mentioned quote from Dr. King closes with the reminder that to serve, "you only need a heart full of grace, a soul generated by love.” Liberal Studies proudly thanks Professor Douglas for embodying the values of Dr. Martin Luther King, Jr. through his teaching excellence, and his life.