Nadya Tolokonnikova, the Russian artist, human rights activist, and founding member of feminist punk band Pussy Riot, spoke to the NYU community. The event was co-sponsored by the NYU Jordan Center for the Advanced Study of Russia and constituted the fourth installment of Liberal Studies’ Global Lecture Series, which hosts internationally prominent speakers at Washington Square.

In conversation with Liberal Studies professor Elayne Tobin, Nadya reflected on her first stirrings of opposition as a child—noting that her “punk feminist” identity developed by chance—and on how her activism has changed with time and circumstance. For instance, while Pussy Riot’s earliest performances pulsed with carnival-like colors and energy, more recent work is darker. “The aesthetics of Pussy Riot have evolved with the mood in Russia,” she explained.

Nadya also spoke about the nearly two years she was incarcerated after staging a symbolic protest in a Moscow church. The dire conditions she experienced in the prison camps led her to lobby for prison reform in Russia. Since her release in 2013, she and bandmate Masha Alyokhina launched a prisoners’ rights organization that has been instrumental in bringing attention to the plight of Russian prisoners. Following her conversation on stage, Nadya answered questions from the audience and spoke personally with students. The sold-out event drew students, faculty, deans, and entire classes. At one point, Nadya joked, “I am not a prophet.”

Still, she brought to the stage riveting stories and perspective on politics and human rights that cuts across global boundaries. Leaving the audience with a final thought, she reflected on her activism and that of activists before her, affirming, “If you don’t fight for your freedom all the time, somebody will take it from you.”

NYU Jordan Center for the Advanced Study of Russia 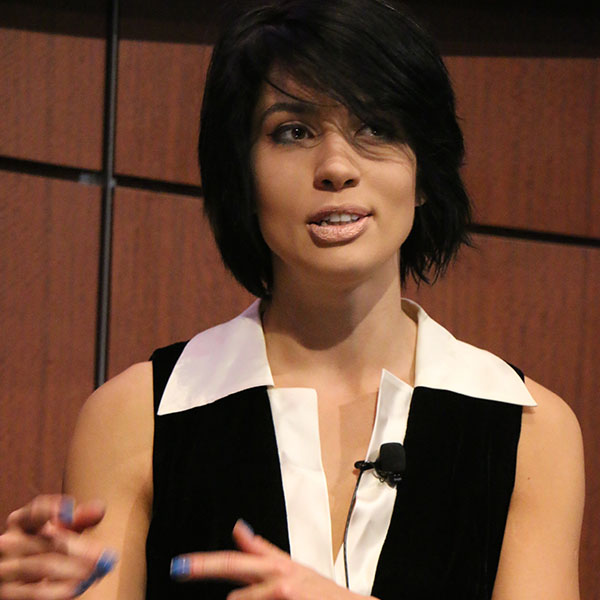